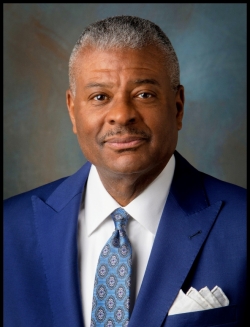 Ron was appointed to the Postal Service Board of Governors by President Biden and confirmed by the Senate on May 12, 2021. He serves on the Board’s Audit and Finance, Operations and Election Mail Committees. Ron served as the 20th deputy postmaster general (DPMG), the second-highest ranking postal executive, from March 2011 until his retirement in June 2020. Since leaving the postal service, he has worked as a senior fellow at the Democracy Fund and served as the lead for President Biden’s transition team for the postal service. Ron had more than 30 years of professional experience in government, legislative affairs and leadership before becoming DPMG. Before joining the postal service, he earned his Juris Doctorate from Rutgers University Law Center.